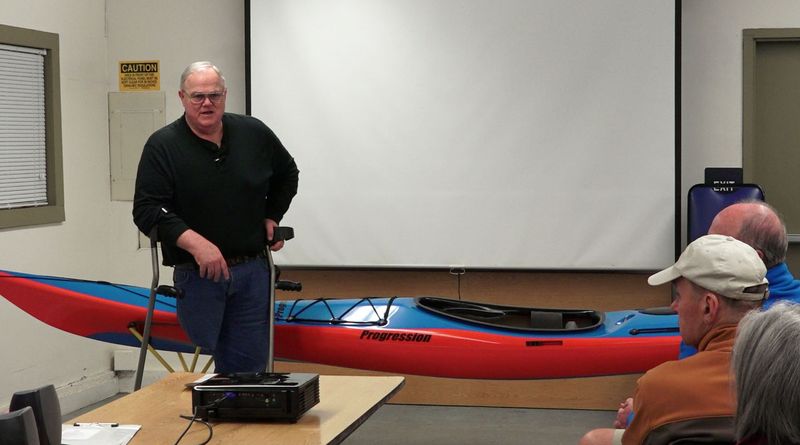 Sterling Donalson of Sterlings Kayaks unveiled the new Progression at the North Sound Sea Kayak Association meeting in Everett on April 2nd. The release of the Progression marks the successful return of his business from a fire that completely devastated his business two years ago. He talked to us about the Progression design and about what it was like to watch his kayak shop go up in flames:

"This kayak is totally symmetrical front to back. It surfs just as well backwards as it does frontwards. The first one we built weighed in at 41.8 pounds with a standard layup. It is 16 ft 1.5 inches long, 1 3/4 inches longer than the Reflection. That is just the way it worked out to get the dimensions we wanted, to get the cockpit heights and the radiused bows. We wanted a fuller bow up high, because we are finding that on steep waves when you are doing aggressive edges, you got to get rid of sharp bows because they will plunge, they’ll poke, they'll pull your bow down. We learned a lot just watching lots of film footage in the waves. We learned what not to do.

We put a lot of features on this kayak that the Reflection has, plus we did a lot more with the deck design. We raised the parting line up significantly higher than on the Reflection because, being a much narrower boat, we wanted a higher degree of secondary stability. And we wanted to come in at the point of your maximum edge. You feel really comfortable on it. We really achieved that goal. That thing is rock steady on its edge!

The cockpit opening itself is 15 in wide, and 32 in on the inside length. That’s what is called a standard sea kayak coaming. Same as a Romany, Same as a Valley. The Reflection is bigger: the Reflection is designed to take a big person, up to 300 pounds. It’s got a lot more volume.

The Grand Illusion is intended for bigger people so it’s got a slightly longer coaming. it is 18 in at the hips, and it has a bigger front radius so you can draw your knees together and stand up. It’s kind of important for bigger people to be able to do that. I designed it for myself. At first it wasn't even intended to be available to the public. But it came out too good not to do it.

The reason this boat is so important, is that the very day of the fire we were going to mold. The Progression plug was set up on the building table. And it was all flanged, and had already been waxed and gel coated. So we were ready to go. The plan was that after lunch we were going to do the first layups and we were going to finish it off the following morning.

I was out doing some final work on the plug in the shop and everyone had gone to lunch. I kept smelling a smell that was not normal in a kayak shop. But I was so preoccupied with what I was doing on the plug to get it done in a timely fashion so I could get to work on it after lunch. I didn’t pay much attention. So I went ahead and finished what I was doing and then I went out on an exploratory search and I went out to a secondary room in the shop where we keep all of our gelcoats and resins. It was a temperature-controlled room, so we’re not dealing with 45 degree resins that need 77 degrees to cure properly. I opened up the door and looked down the passageway towards the paint area. And as soon as I looked into the paint area, I saw some black smoke around a wall receptacle about 5 ft up the wall. And as soon as I saw the black smoke, it started belching out more. And me opening the door, I think, relieved the pressure or allowed additional oxygen. It turned from smoke to flames. As quick as I saw it I had to duck over and start crab walking towards the side door to get out. And I’m outside dialing 911.

First I made sure my son-in-law was out. He was out getting me coffee. And my other employee was out in his pickup truck in the back parking lot. His habits were that at lunchtime he’d just go out to his truck, and he had a stack of newspapers out on the driver’s seat, so he was catching up on the times, reading, and then he always has the radio on the local talk show. He heard an announcement on the radio that there was a small business out in our area on fire. And here I am standing out in the parking lot, on the other side of the building, and Steve comes walking around the business and he says, “Hey Sterling! I just heard on the news that there is a business out here and it’s fully engulfed in flames!” and I said, “Steve, look behind you!” And he was like, “Ohhh!”

We looked through through the windows and we could see all of this ceiling insulation coming down in sheets of flame, and draping over all the boats. And you knew you couldn't get in there.

Then the fire department came. And Steve says, “You know, we got a trailer load of demos out in the back. Let’s go back and pull them out of the way”. So I start going around back to pull these out and the fire department stopped us. And they said, “Don’t. We’ll take care of it.” A couple lady firemen pulled the trailer out and got all that stuff. And they pretty well saved my bacon, because those were the starts of most of my models. Even though they were heat warped and a little distorted, it was still a starting point.

I got on the phone and called my wife. And I said, “Our business just burned down. It’s a total loss.” And the first question out of her was, “Is everybody OK? Is Ryan OK?” And I said, “Yeah, everyone is fine.” And then she paused for quite a few seconds, and then she said, “Fresh start”.

So we took off from there. From that point it was just dealing with different aspects of having a fire. And going through fire investigations and the labs that came out and did all their lab analysis of it. There was never anything that they could determine that was the cause. But we knew what the cause was. There were a lot of electrical issues in the building. When you have conduit that would leak water through the plug-ins. And when you have conduit that would fill your lights up with water, we had problems. It was a rented building. It was one of the things that we were supposed to get fixed by the landlord, but it just didn’t happen.

It was kinda where we left off at that year, and we had a whole rebuild ahead of us through the whole winter. We dispersed into small segments and we were rebuilding molds in small garages from my employees, and I had friends doing plug work and fairing work in another shop and another garage. And I’m running between every which place I can trying to get this done. We had local clubs, surf ski clubs and out local kayak club during Christmas they had benefit. We had people buying boats from me, giving me payment in full and putting no time limits or constraints on me as when they took delivery. They just wanted me to have the cash. So everybody pitched in. It was a joint effort.

A lot of people came in and helped — the paddling community, people from our church. It was just totally unexpected, the number of people that came and rendered help, rendered funds. And even our neighbors that we moved next to in this big building. They were a Romanian family, and they were over there pitching in, doing firewalls and drywall work, and insulation. Whatever they could help they were doing it."

The red and blue Progression he brought to the meeting is only the second kayak out of the mold and is destined for Sweden. So far, the response from his test paddlers is that it is an amazing design — highly maneuverable, exquisitely responsive to edging, and surprisingly fast, despite having a great deal of rocker.