Gerhardt Raven of Ravenwoods Paddles and Qajaqs hosted a small gathering of traditional kayaking enthusiasts at Rebecca Spit on Quadra Island last weekend. It was loosely structured and there was no schedule. People showed up Friday and Saturday and there some rolling instruction and practice going on as well as trips out around Heriot Bay or the Breton Islands. We all shared a campsite that Gerhardt had reserved. It was right on the beach and had an awesome view of the sunset.

Alan Dunham and Michael Jackson were out rolling the first thing Saturday morning, fully geared up in tuiliks and very low volume Tahe Greenlander kayaks. Alan brought his special rolling brick that he had prepared by wrapping it in tape and coating it with bright red Plasti Dip. He was sharing a lot of tips and tricks and rolling esoterica. These guys are serious!

I put on a drysuit and waded out to shoot this video. The cove at Rebecca Spit is very shallow for quite a way out from the beach. At low tide it can be a long hike across gravel and clams and oysters to the water. At high tide the water is is a perfect rolling location: calm and protected, unusually warm and crystal clear. I shot this entirely on my iPhone 6 plus. It not only shoots HD at 240 fps, but also has optical image stabilization -- an amazing camera!

Posted at 06:28 PM in The Art of Greenland Style Sea Kayaking | Permalink | Comments (0)

Meet the Kayaktivists from Baby Seal Films on Vimeo.

Protesters for environmental and social justice causes are often described as hippies, anarchists, pot heads, hipsters, and unemployed losers dependent on government assistance. Alternatively, they are labelled as idealistic, privileged college kids, still too naive to understand how the world really works. This stereotyping is a mental shortcut intended to distract from, and dispel any interest in, the actual issues to which protestors are attempting to bring attention. 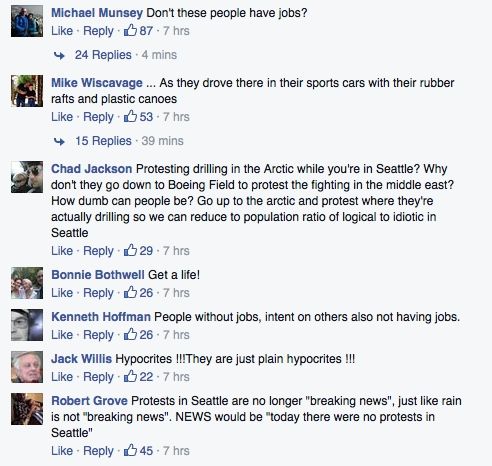 In the case of the Paddle in Seattle protest against the Port of Seattle hosting Royal Dutch Shell’s exploration oil rig, the Polar Pioneer, the most common label I have heard thrown at the kayaktivists is “hypocrite”:

“Don’t they realize that that all of their colorful plastic kayaks are made from OIL? GET A JOB!”

“I bet they all drove their cars to the protest. #IRONY.”

The argument assumes that the kayaktivists oppose the use of all and any petroleum products on principle. It’s the first - and usually the only - argument offered, as if simply calling the protestors “hypocrites” completely invalidates the argument that offshore drilling in the arctic both risks damaging fragile ecosystems and will contribute significantly to global climate change.

No one can escape using petroleum products and still live in the modern world. We have few choices in this, in large part because the oil companies have always fought to limit the availability of alternative fuels (whether it is electric or biofuel) to preserve their monopoly and keep us addicted. But just because you use plastic or drive a car doesn't mean that you don’t have the right to speak out against a dangerous trend in continuing oil exploration and development and fight to stop it.

In an interview in The Nation, Harvard historian Naomi Oreskes stated that during the era of American slavery, “people in the North wore clothes made of cotton picked by slaves. But that did not make them hypocrites when they joined the abolition movement. It just meant that they were also part of the slave economy, and they knew it. That is why they acted to change the system, not just their clothes.”

For this video I wanted to interview people on the water and show what they were really like, and find out why they were out there. Each person involved in the Paddle in Seattle had his or her their own reasons to protest the presence of the Polar Pioneer. One is the lack of the public’s participation in the Port of Seattle’s decision to allow Shell to park the Polar Pioneer at Terminal 5. Even Seattle’s ex-mayor Mike McGinn stated that the Port commissioners knew that their decision would be controversial, so they kept the negotiations secret and ran the decision through quickly to limit time for public input.

Another concern is that offshore drilling risks another massive spill like the Deepwater Horizon incident, involving a company that already has suffered from an incident involving an exploration vessel running aground when the engines of a tow ship failed during a storm while it was being towed to Seattle, and a number of safety violations related to arctic exploration. The harsh conditions and remoteness of the arctic would make dealing with a major spill difficult.

Of course a big concern is the impact continued oil exploration and development will have on climate change. A recent study in the journal Nature concluded that exploitation of the arctic oil reserves would threaten our ability to keep the average global temperature rise below 2 degrees Celsius, the tipping point where one would expect widespread coastal flooding, animal and plant extinctions, and a severe impact on global agriculture. In fact, Shell’s own internal documents estimate a 4 degree Celsius rise in average global temperature in the short term, rising to 6 degrees in the long term.

The kayaktivists we interviewed:

Colin Miller is a residential carpenter/contractor and Seattle resident. He paddles a classic wooden Pygmy stitch-and-glue kayak. The Paddle in Seattle is the first time he has ever been active in a protest.

Felicia Wibowo is a software engineer. She owns the original black Dubside IceKap designed by Sterling Donalson of Sterling Kayaks. The original portrait of Dubside has been painted over.

Milla Prince is a resident of Lopez Island and paddles Greenland style. She is a writer, community organizer, a life-long environmentalist and wild-crafter, and holds a degree in filmmaking.

Posted at 06:08 AM in Environmental Activism | Permalink | Comments (0)