It's only a four and a half mile paddle from the beach by my house to Owen Beach at Point Defiance, where the Puget Sound Sea Kayak Symposium was being held. I landed on the demo beach around noon on Saturday, this time paddling my Shooting Star cedar-strip baidarka (because I like all the attention it gets). Richard Lovering paddled his Greenland skin-on-frame from the Thea Foss and we sat them next to each other on the beach and talked about wooden kayaks with curious passers-by. One big reason I personally like to show up at kayak symposiums is to help represent wooden kayaks and Greenland Style. 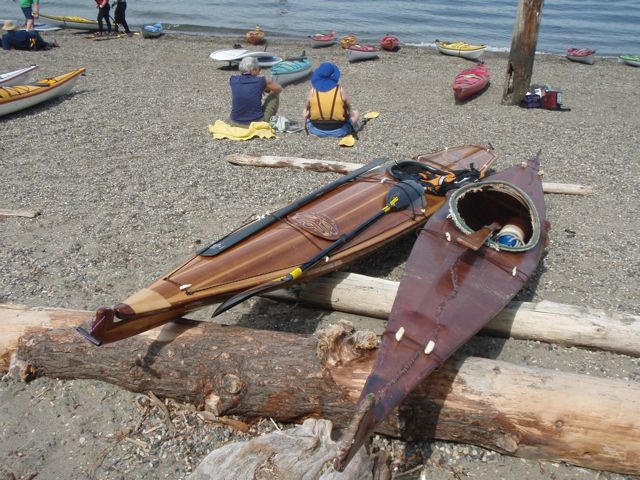 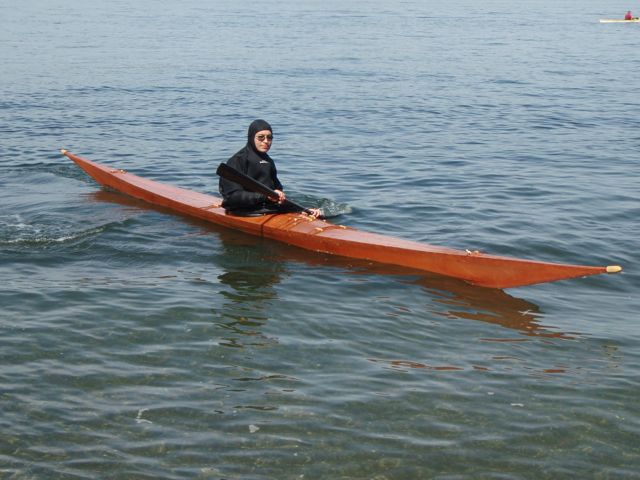 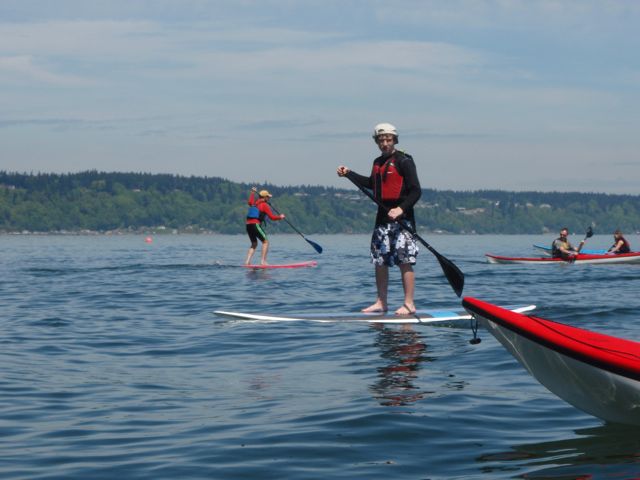 Stand-up paddle surfboards had a big presence this year. Lately I've seen more people trying this in the Sound. I couldn't resist trying it. Compared to sitting in a kayak, it presents a bigger challenge to your sense of balance and gives your legs a workout. It must take a lot of practice to be able to use it in rough windy conditions though, not to mention actual surf.

I met Chris Cunningham at the Sea Kayaker Magazine booth. I picked up a free copy of the 25th Anniversary Issue, the one with a picture of a traditional Greenland kayak frame on the cover. Chris said that it was actually a picture of a kayak frame that he had built. I felt a little awkward picking up a copy of the magazine there in front of him, because it obviously means that I don't have a subscription to it! He knows I take sea kayaking seriously too. I wanted a copy of this issue though because Chris had written another article about Freya Hoffmeister for it. I really only have room and the attention span for one magazine subscription in my life, and this year it was to Wooden Boat. Honestly, I hardly even read that anymore. Who reads anything in print these days, seriously? 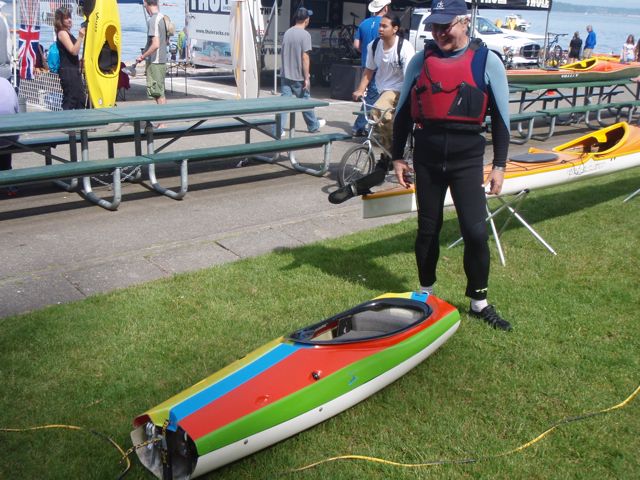 Sterling Donalson offered a number of his kayaks for demos, both the IceKap and Illusion design. He brought along an interesting device which looked like an adjustable kayak cockpit. I suspect it is for fitting people for custom deck heights for his kayaks.

Although the IceKap has gotten a lot of attention because of Dubside, the Illusion is gaining a reputation for being a fantastic rough water boat. One thing that Sterling discovered recently was that the Illusion handles well with a cockpit full of water. Because the upswept ends and rocker give it a low center of gravity, it remains remarkably stable and easy to maneuver when completely flooded. I recommend you try that with the kayak you own right now. I think paddling with a flooded cockpit really should be an essential test when trying out a new kayak. It simulates a real rescue situation such as following a wet exit or re-enter and roll.

In the video: Richard tries out the Hobie Mirage Drive and a stand-up paddle surfboard, and gives a glowing review of the Sterling Kayaks Illusion.